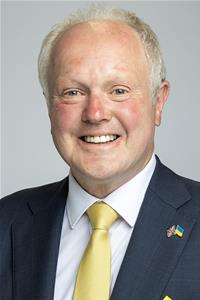 Always available by phone or email. Regular surgeries at The Crescent Centre, Warbler Drive, Lower Earley. Contact me for details.

Clive was born in Gillingham in Kent. he moved to Earley with his parents in 1974 and attended Bulmershe school in Woodley for two years.

He has lived in Hawkedon ward with his wife and children since 1992.

In 1979 he joined a Toy manufacturer as a management trainee, stayed for 27 years spending the last 11 as Managing Director. The company was part of a European group of Toy companies.

He has been a trustee of two children's charities associated with the toy industry.

Clive is a former hockey player at Tilehurst Hockey Club and Henley Hockey Club.  He enjoys playing golf, he has been a member of Sonning Golf Club since 1986 and was Club Captain in 2008.